Japan is known not only for blooming sakura, samurai and computer game developer Hideo Kojima. In fact, in the Land of the Rising Sun there are a lot of attractions that are worthy of attention. For sophisticated tourists, a trip to Okinawa – the largest island of the Ryukyu archipelago – will benefit. 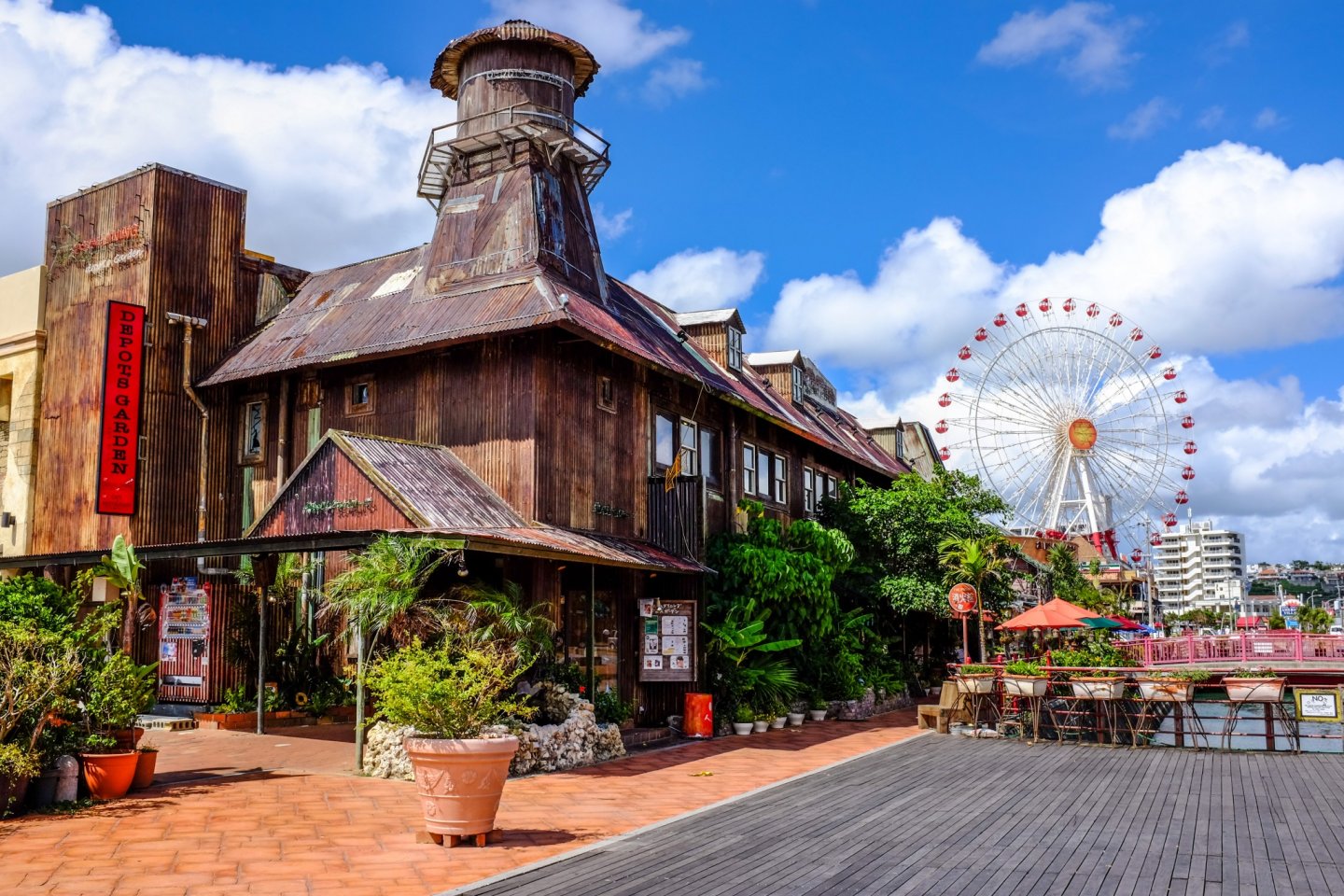 The village was built on the site of the United States military base, so many buildings are exclusively in the American style. This place is popular with European tourists.

Here you can also find many attractions, including excellent shopping, many restaurants for people with all tastes and different financial opportunities, as well as beaches with great views. In addition, in the Chatan area you can ride on a sixty-meter ferris wheel, play bowling, and the children will have a great time in the games rooms. In the evenings, live music spreads through the streets and a fire show is organized.

AEON Supermarket offers a grocery assortment with a rich selection of European, Japanese and American cuisine. Many shops of clothes, shoes, jewelry and souvenirs will also not leave anyone indifferent. Moreover, often they are satisfied with discounts, and the quality continues to be at the highest level. 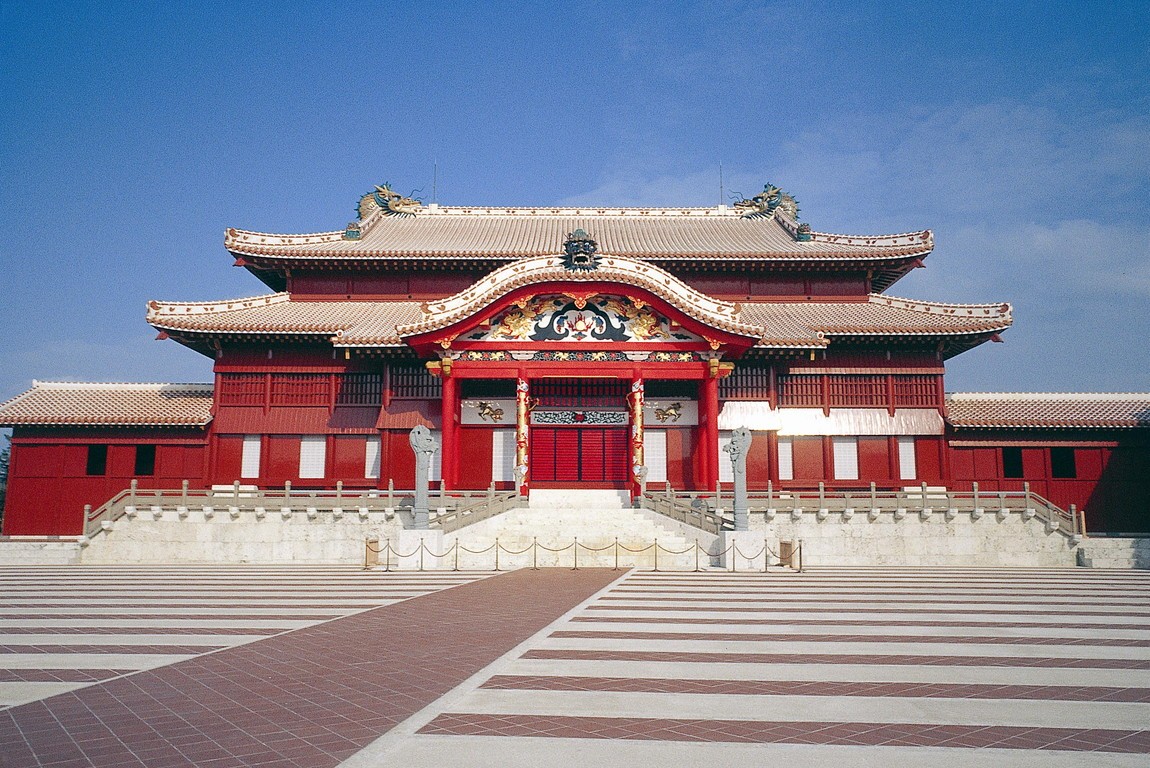 The building is located in the south of the island in the city of Naha. This is the residence of the rulers of the Ryukyus, and it is deservedly listed on UNESCO. From the 15th to the 19th centuries, this place was the center of life of the entire archipelago. In the 40s of the XX century, the American military destroyed the castle, but thanks to the remaining images and memories of eyewitnesses, it was restored.

The ceremonial gates of the castle now show off in all Okinawa travel guides. Tickets for tourists cost about 800 yen per person. 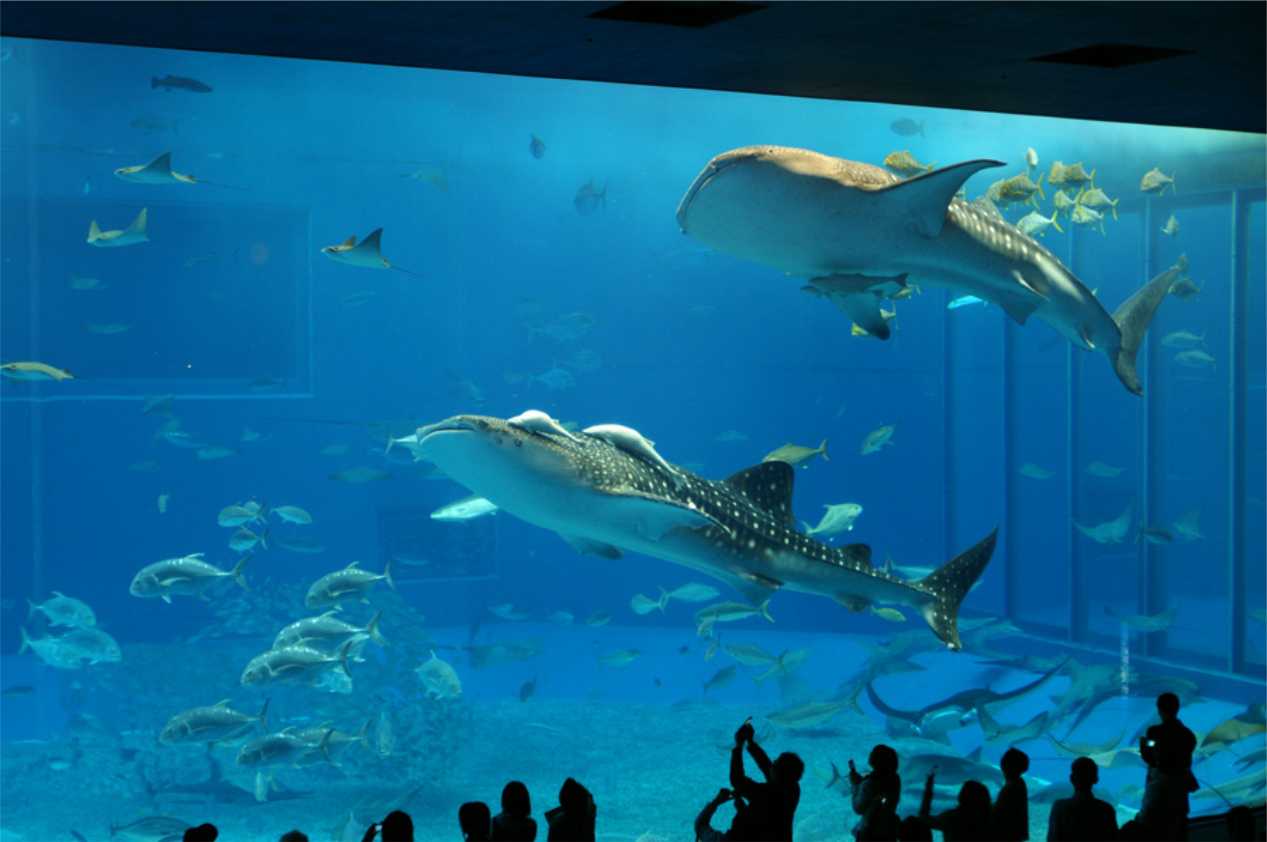 “Türks” is a huge aquarium, which cannot be passed. It is a four-story building, where 26,000 species of representatives of the underwater world are collected, and they live in 77 aquariums.

Here you can find not only dolphins, turtles, corals and other animals, but also the largest shark in the world – the whale. Tourists can also see the famous sea devil. The Okinawa Oceanarium is the only place where these animals breed in captivity.

A ticket for one person costs 2,000 yen. At the entrance you can see the schedule of various events. For those who are hungry, a restaurant with a panoramic view of the sea is offered. 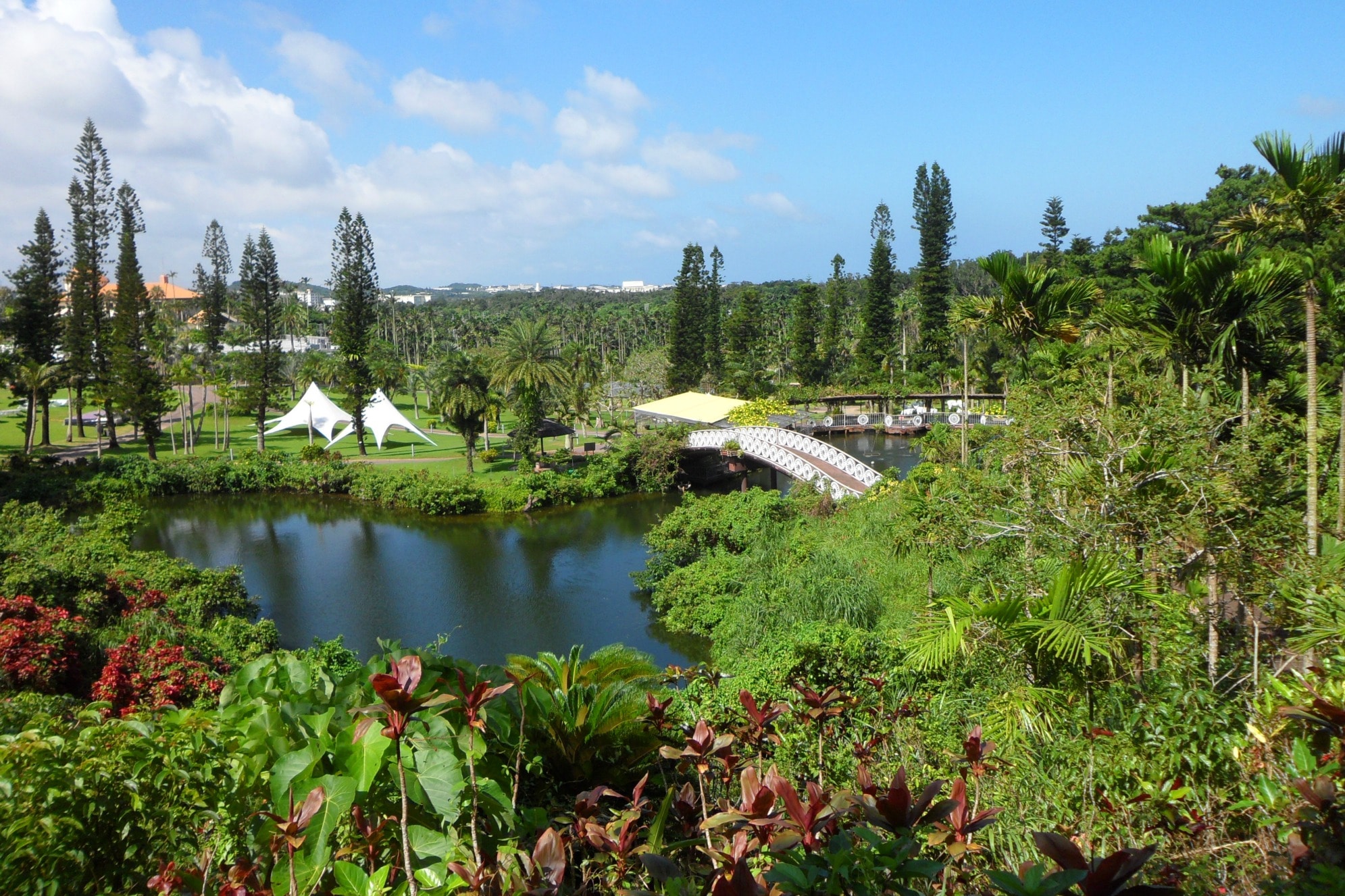 Tropical Dream Center is a true green kingdom. It is divided into 14 thematic areas, in each of which tropical and subtropical plants are represented. Here you can count up to 2,000 species of orchids. 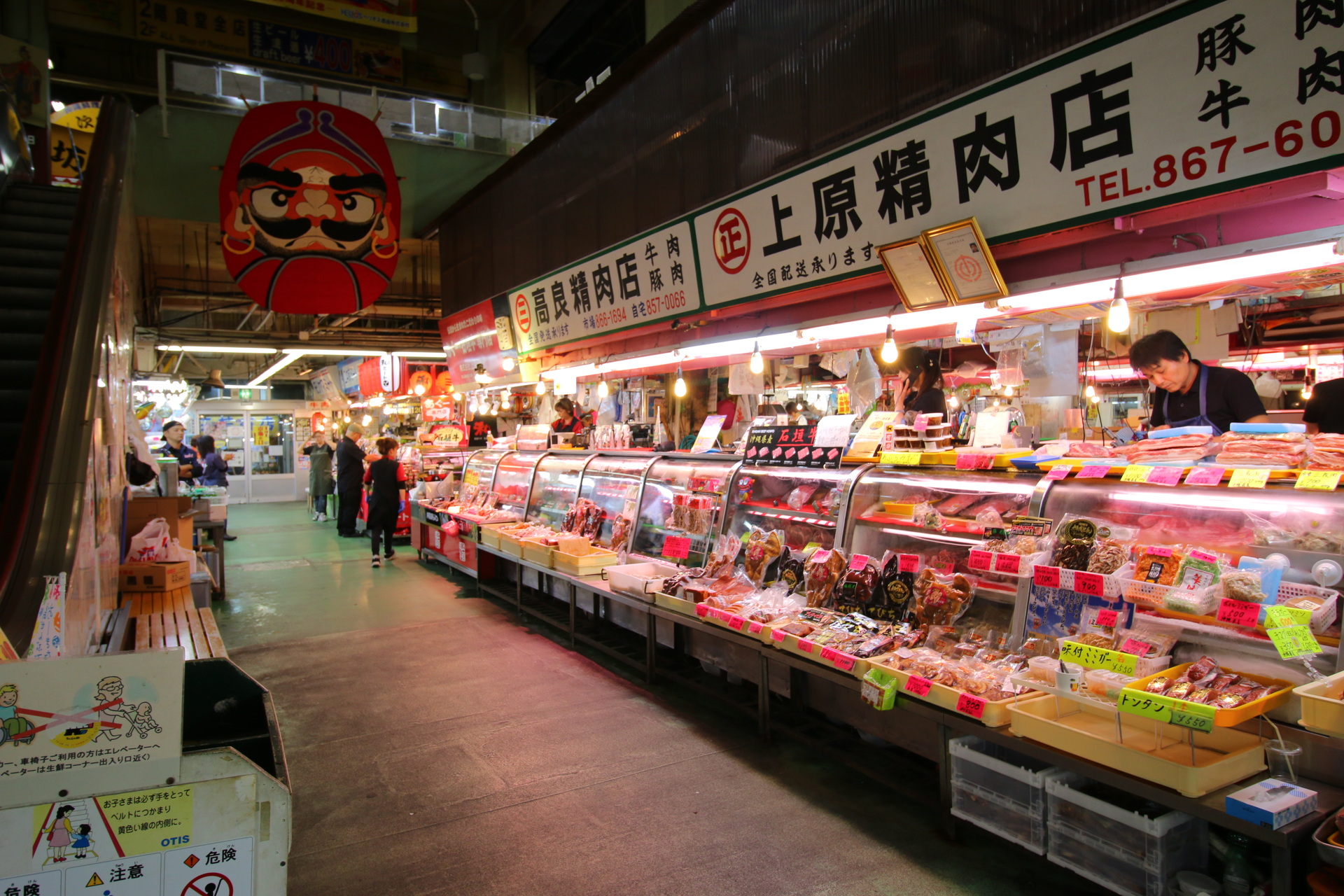 In the largest city of Okinawa – Naha, the Makishi Market is located. It is located on the main street of Kokusai. It offers the national cuisine of the island, in which there are seafood, and pork, and vegetables. Everything is only the freshest. If there is a desire to try something from the assortment in a ready-made form, on the second floor there are many restaurants awaiting guests.

This article was originally published at: SalatShop, this is a translated version.

PrevPrevious10 products that we always have at home
NextVacation is ruined: what to do if you have a toothache while traveling?Next